Uncertainty is everywhere. It lurks in every consideration of the future - the weather, the economy, the sex of an unborn child - even quantities we think that we know such as populations or the transit of the planets contain the possibility of error. It's no wonder that, throughout that history, we have attempted to produce rigidly defined areas of uncertainty - we prefer the surprise party to the surprise asteroid. We began our quest to make certain an uncertain world by reading omens in livers, tea leaves, and the stars. However, over the centuries, driven by curiosity, competition, and a desire be better gamblers, pioneering mathematicians and scientists began to reduce wild uncertainties to tame distributions of probability and statistical inferences. But, even as unknown unknowns became known unknowns, our pessimism made us believe that some problems were unsolvable and our intuition misled us. Worse, as we realized how omnipresent and varied uncertainty is, we encountered chaos, quantum mechanics, and the limitations of our predictive power. Bestselling author Professor Ian Stewart explores the history and mathematics of uncertainty. Touching on gambling, probability, statistics, financial and weather forecasts, censuses, medical studies, chaos, quantum physics, and climate, he makes one thing clear: a reasonable probability is the only certainty. 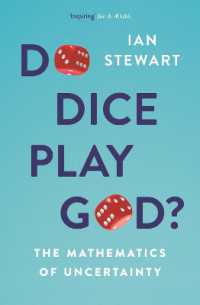