Pen is a penguin. His favorite things are pancakes and fastidious household upkeep. Pen lives in the city with his friend Hayakawa, a human. They can't communicate in words, so the only way for Pen to express his love is by doing laundry and getting good deals at the supermarket. This is a chronicle of their life together--let it snuggle on your shelf next to A Man and His Cat or Way of the Househusband! NESTING Pen the penguin lives with his most favorite keeper in the world: Hayakawa the human! But Pen's no ordinary penguin... He's a neat penguin! A proper penguin! A doting penguin! Pen loves to daydream of Hayakawa's smile as he flips pancakes, runs errands, and folds the laundry with his teeny-tiny flippers. If only his beloved Hayakawa would notice! Unfortunately, Pen's human keeper can't speak penguin and is also a hopelessly lazy university student. With Pen's comical expressions and Hayakawa's lighthearted cluelessness, every day in their house is full of adorable mishaps and hijinks! 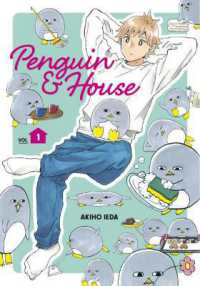