"A "mind-blowing, page-turning, unputdownable" novel (Elif Batuman) about the fifteen-year fallout from a poisonous high school rumor, exploring how stories from the past can come to define who we are. A gifted and reclusive ghostwriter, Alice Lovett makes a living helping other people tell their stories. But she is haunted by the one story she cannot tell: the story of, as she puts it, "the things that happened while I was asleep." Back in 1999, Nick Brothers and his high school lacrosse team return fortheir senior year in a well-to-do Baltimore suburb as the reigning state champs. The afterglow of their big win is bound to last until graduation; not even the pressure of college applications can get in the way of their fun. But when a private school girl attempts suicide in the wake of one of the team's "legendary" parties, and a rumor begins to circulate that two of Nick's teammates sexually assaulted her, it seems like it might ruin everything--until the team circles the wagons, casts doubt on the story, and the town moves on. But not everyone does. Fifteen years later, four people--Alice, Nick, a documentary filmmaker, and a wealthy entrepreneur--remain haunted by the roles they played, the things they still don't understand, and how the story has shaped their lives. In sections told from different points of view, each more propulsive than the last, the layers of mystery are gradually peeled back as we barrel toward the truth of what really happened that night . . . and what came after. At once a compulsive page-turner and a thought-provoking exploration of issues both timely and timeless, True Story marks the debut of a phenomenal new voice in fiction"-- 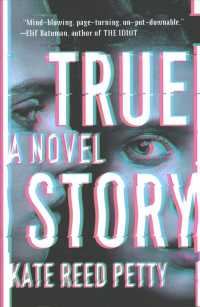