The Rise of Kyoshi ( Avatar: the Last Airbender 1 ) [Hardcover]

The discovery of Yun, a young Avatar, brought stability to the four nations until Earth Kingdom-born Kyoshi, Yun's friend and servant, demonstrated remarkable bending during a mission to the South Pole. When growing unrest among her allies turned to violence, Kyoshi was forced to flee the Avatar mansion with her fiery friend Rangi, taking little more than the metal war fans and headdress her parents left behind. Finding unlikely supporters in the criminals and outlaws living the shadows of the Earth Kingdom, Kyoshi and Rangi are torn between following the traditional paths of an Avatar, and seeking vengeance for those she has lost. -- adapted from jacket 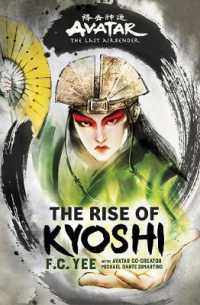